“When I woke up on the morning of the trip, I said I can’t do it. I can’t go. Then I thought to myself, ‘for goodness sake Gary, get yourself out!’, and I’m so glad I did.”

Gary, 62, is a life-long fan of Middlesbrough Football Club. Along with his dad and his two brothers, he’s had a season ticket for as long as he can remember; since the Ayresome Park days! Unfortunately, Gary was diagnosed with bowel cancer around four years ago, and it has become increasingly difficult for him to attend matches. After Gary was referred to Teesside Hospice for full-time care, Staff Nurse Anne Hall organised for him, along with his mam Judy and close friend Dave, to visit the Riverside Stadium and have a tour of the grounds.

Gary told us all about his special trip, and how much it meant to him.

“I’ve always been such a big Boro fan. I used to love the Ayresome Park days. It was run down, and mainly standing room, but it was great. We preferred to stand back then, but now at 62, not so much! I actually even bought two houses right by the grounds so that I was really close… I only had them for three years before they moved to the Riverside!

My friend Dave and I went to every single match. No matter where the away matches were, we’d always go together on a bus with all the regulars, organised by John Donovan. It’s a lot harder for me to go to a match now, the last one we went to together was the Rotherham away game in 2018. We won 2-1!

I’ve been trying to arrange to go to a match, but my illness has stopped me. I’ve had multiple operations and rounds of chemotherapy; it’s been a bit of a rollercoaster. The last match I went to was at the end of the season, I didn’t have any chemotherapy during the summer. My invasive chemotherapy started right at the beginning of the new season – typical! It always coincided with a match, so unfortunately I couldn’t go.

That’s why I was really looking forward to visiting the stadium. I didn’t know what to expect, but it was fantastic! We arrived and met Alan Geddes, who was really welcoming and showed us around. We walked through the corridors that had a timeline of the different players, and had a look in the changing rooms.

We went into the trophy room, which had replica cups in. It was really interesting to see! There was lots of different merchandise too, from caps to the old football kits – there was even one from the turn of the century. I also got to sit in the press box and make some announcements, as well as sitting in the home team dugout! I had so much fun.

It was absolutely tremendous. It’s perked me up no end! The morning I was meant to go, I really didn’t feel up to it, and almost called it off. I woke up and said ‘I can’t do it. I can’t go’. Then I thought to myself, ‘for goodness sake Gary, get yourself out!’, and I’m so glad I did.

I’ve been at Teesside Hospice for around two weeks now. It’s been brilliant, I really can’t fault it at all. There’s always someone there. To anyone who is in a similar situation, I’d really recommend the hospice. You just press and button and there’s someone there, and that’s really important.”

“It’s so comfortable here. We can make ourselves a cup of tea or coffee whenever we want, and the gardens are lovely. We’ve had a walk around the gardens when family have been to visit, it’s really relaxing. Having someone always there to help really keeps the anxiety at bay; everyone is so kind.”

“I organised the trip with Middlesbrough Football Club when I found out how big a fan Gary really is! It was such an amazing visit that meant such a lot to Gary, his mam and his friend Dave. Thank you to MFC for the opportunity, and a special thank you to Alan Geddes for being a wonderful guide and making it a great experience. Memories like these are so precious to us all.” 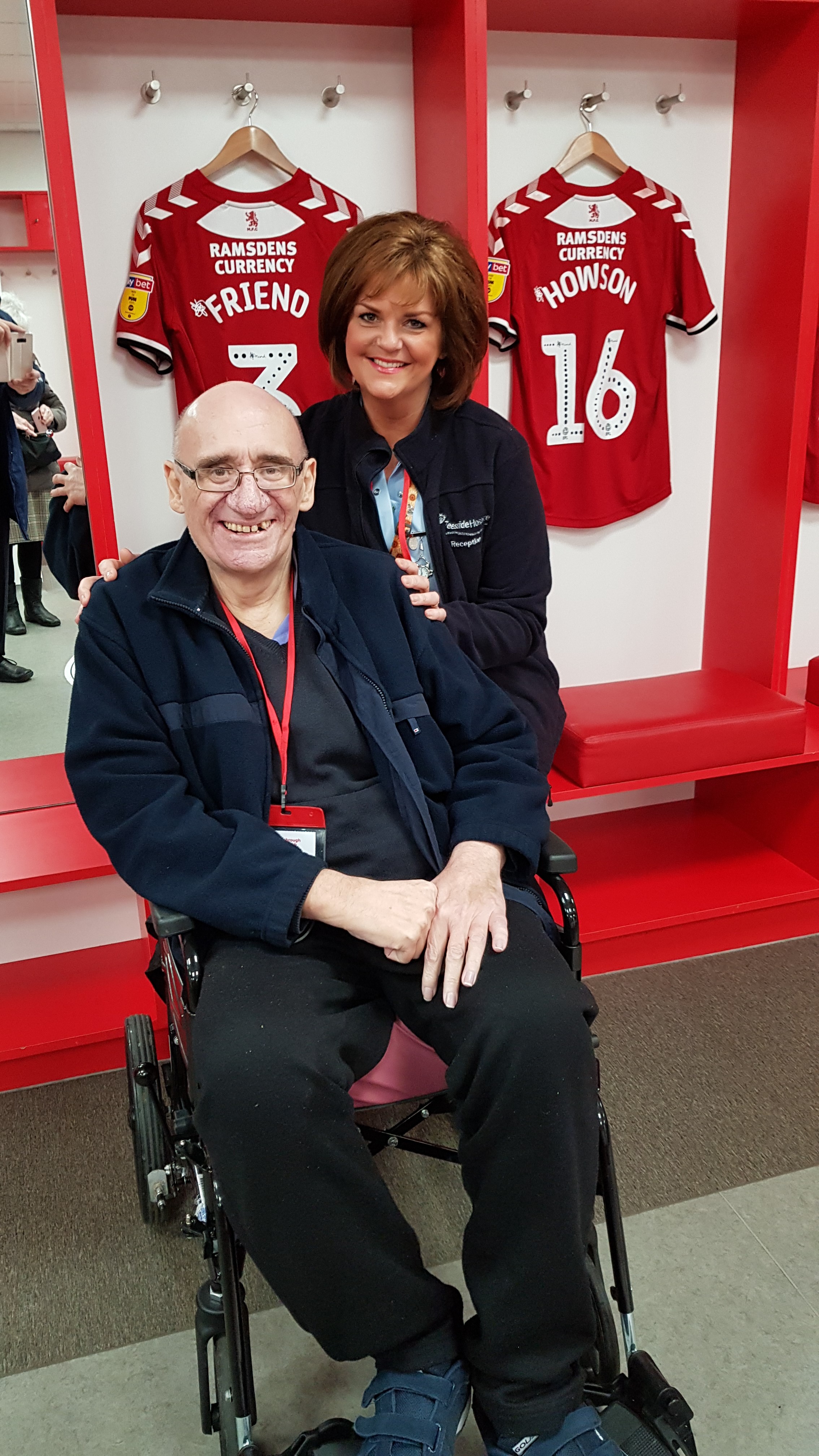 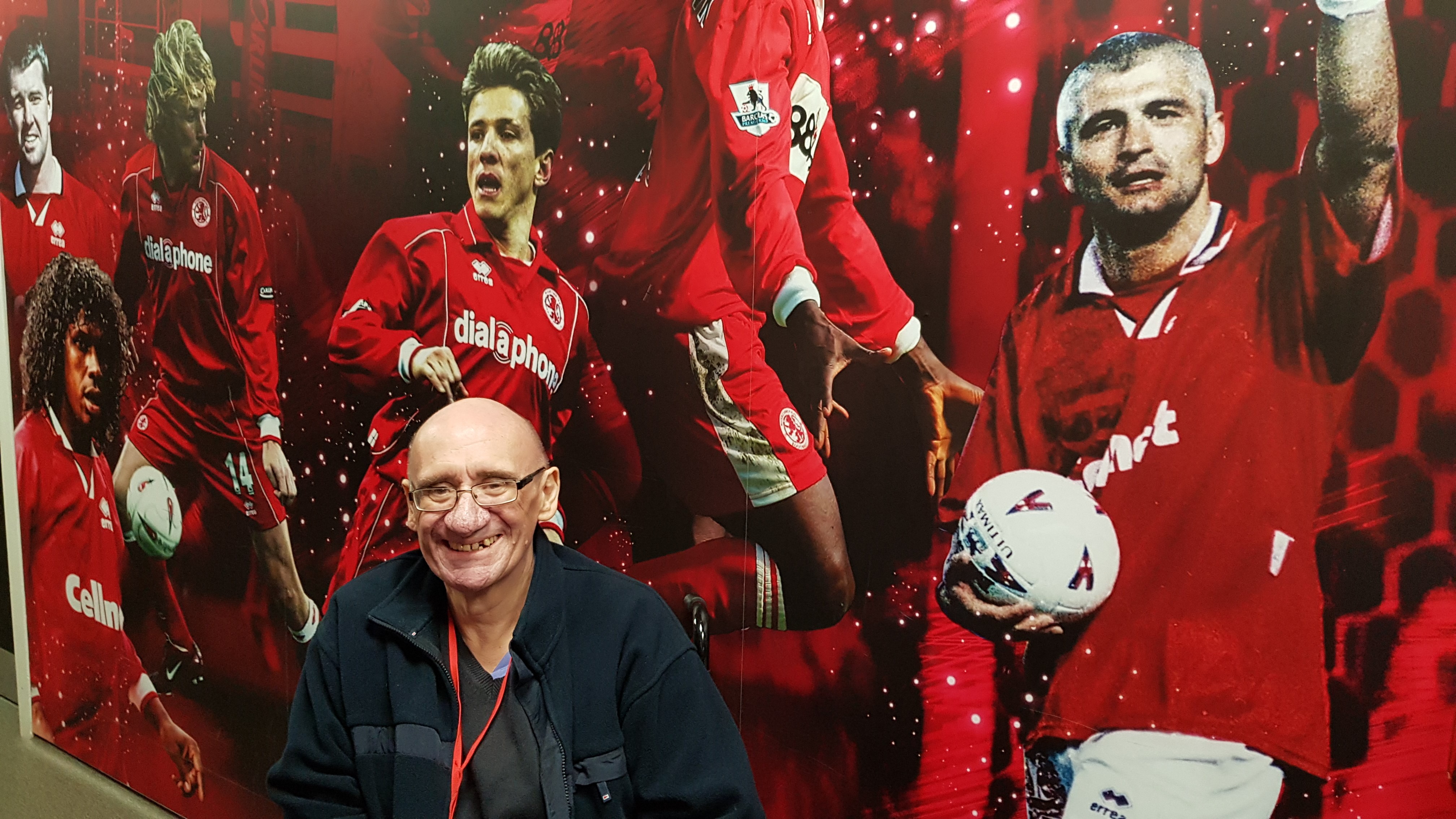 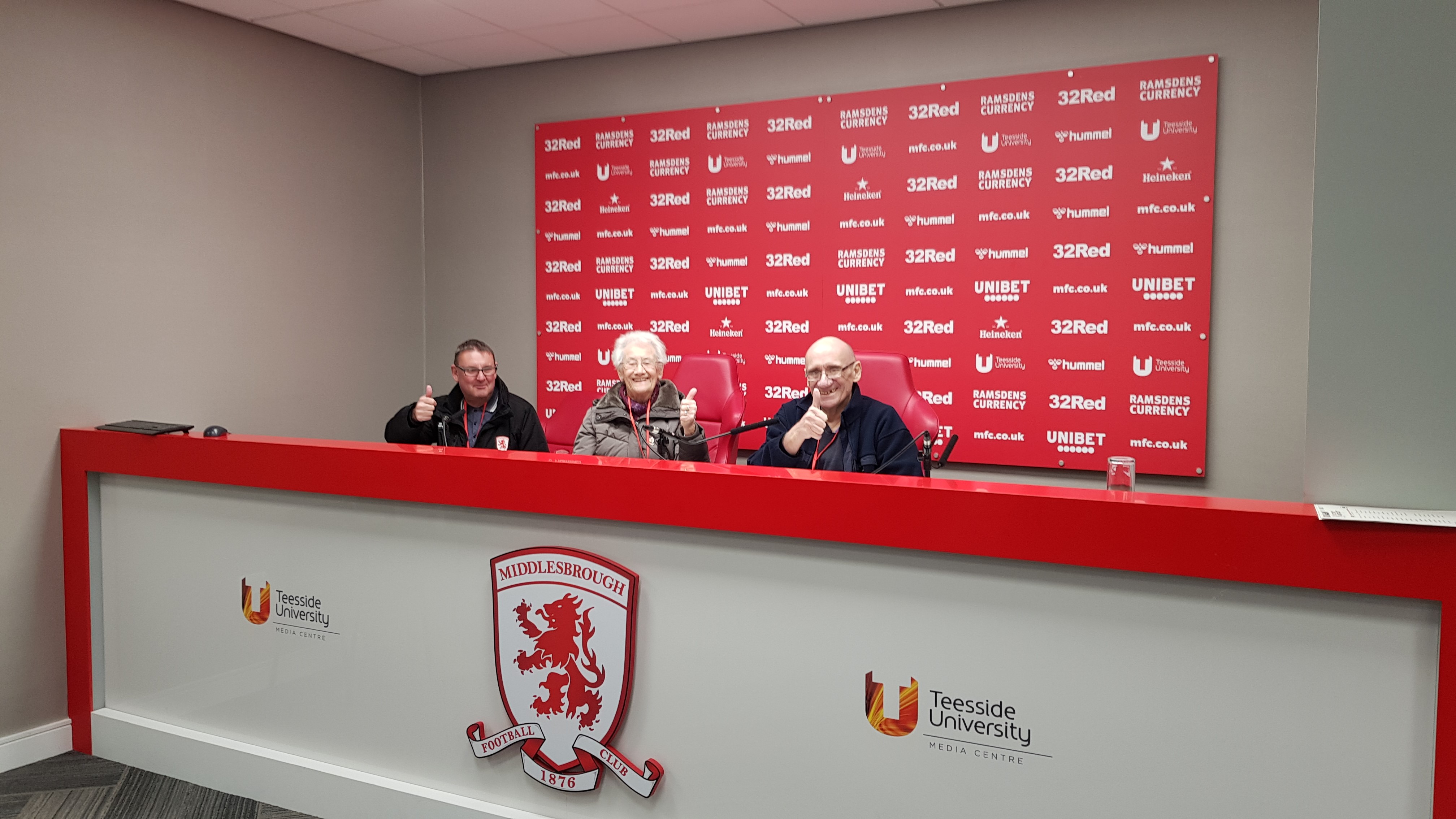